No, that’s not a little human girl in a cat-suit. Evidently that’s what people look like in the world of Henni, a new black & white graphic novel by indie comic book star Miss Lasko Gross. “In a fantastical world, where old traditions and religion dominate every aspect of life, lives a girl named Henni. Unlike most in her village, Henni questions and wonders what the world is like as she comes of age. Striking out on her own, Henni goes out in search of truth, adventure, and more! Written and drawn my Miss Lasko Gross (A Mess of Everything and Escape From Special), Henni is a commentary on, religion, coming of age, and being yourself.” It’s also coming in softcover this January from Z2 Comics, but you can check out the preview pages over at Comics Beat. 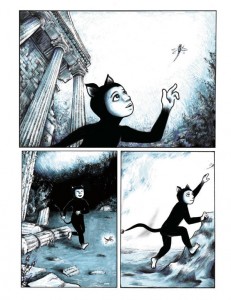