Next year, the pigs come to power! Or at least, they take a crack at it… again. “In a dark, oppressive future, pig-men work tirelessly as the slaves of human masters, feeding a society they cannot fathom. When Oink realizes that the dogma being forced on them is all lies, he undertakes a path of revenge and revelation.” Written and illustrated by John Mueller, OINK: Heaven’s Butcher is celebrating its 20th anniversary with new sequences and a new paint job in this new trade paperback from Dark Horse Press. Over at Comic Book Resources they have more: “Influenced by George Orwell, Pink Floyd, and Simon Bisley, among others, OINK debuted in 1995 from Kitchen Sink Press, telling the dystopian story of pig-men who work as slaves to feed their human masters. But when Oink witnesses the execution of one of his comrades, he violently rebels and sets out on a quest for the truth about the creation of his race and revenge against its oppressors.” Check out the preview images too — and look for the graphic novel in February. 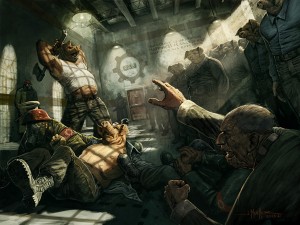