Ultimum is another new electronic game system of more than passing furry fandom interest which is seeking development funds through a Kickstarter campaign. Created by Christian Muckler and his associates, Ultimum seeks to recreate the playing environment of a traditional tabletop fantasy role playing game — not only in a paper tabletop setting, but also as a virtual on-line “sandbox”. We should also note, of course, that the game includes several non-human playable races it its science fiction setting –  Including humanoid bears, wolves, lizards, and gorillas. The Ultimum Kickstarter page includes several development videos as well as an animatic “game trailer”. 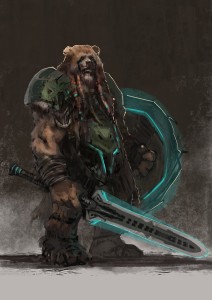