Animals at the Office

Anouk Ricard is a cartoonist from Europe known for his satirical, surreal creations — usually involving animal characters. In his new graphic novel Benson’s Cuckoos we meet a hapless new office worker named Richard — who’s about to discover that his boss and his co-workers are more than just strange, they’re outright dangerous. Here’s what Publisher’s Weekly had to say: “Originally published in French as Coucous Bouzon, this comic is like a fever dream of workplace anxiety drawn by Richard Scarry for those worn down by the business grind. Richard has just started a new job at a company that makes cuckoo clocks. That’s apropos, since the boss seems at best distracted, at worse insane. He’s been hired to replace a man named George, who disappeared suddenly. As Richard tries to cope with being asked to bring his own computer and prepare presentations without supporting files, he finds himself enveloped in the growing mystery of just what happened to George. It’s silly, with much of the humor coming from what look like children’s toys shooting or propositioning each other. The art is childlike, flat and colorful, but the content is distinctly adult.” Published in full color by Drawn & Quarterly in trade paperback, Benson’s Cuckoos is available now from Barnes & Noble. 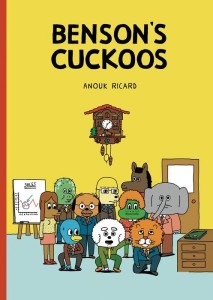