“… of the animals who didn’t get on the Ark.” That’s the official tag line of Oops! Noah is Gone, a new CGI feature film coming out later this year. Produced in Germany and animated all over Europe, it follows the story of David and his young son Finny, the last of the Nestrians, and what happens when one of them misses the boat — literally. The official English trailer explains it all better… sort of. No word yet on if it’s to be released to North American theaters or only on DVD. Thanks to Cartoon Brew for the heads-up.

[Don’t forget, nominations for the Ursa Major Awards are open now! And with that, we’ll see you all after Further Confusion!] 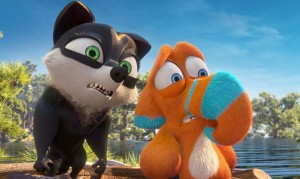