… and They Can Talk to Her

“Kira is a young woman with a secret. She can psychically communicate with animals. She is also on the run from her abusive mate Toril, the hero turned warlord, who led the country’s forces to victory against the outland raiders. Only that was before his love of power consumed him. Now, his only focus is on tracking down Kira and making her punishment an example of his power.” So goes the story of The Healer’s Legacy, the first book in a new young-adult fantasy series by Sharon Skinner. She’s also the author of The Nelig Stones, a fantasy for younger readers featuring villainous talking dragons — and other magical folk. All of this and more can be found at Brick Cave Books. Turns out they also published The Last Incarnation by J.A. Giunta, which was previously reviewed here at In-Fur-Nation. 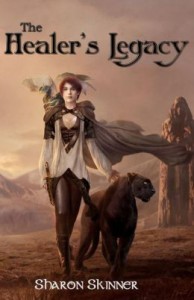