If you haven’t been keeping up, DC Comics are currently in the middle of a large mega-series known as Convergence, which brings together characters from all over the DC universe.  Literally from all over it! Check out the description of Convergence: Harley Quinn #2: “Harley Quinn, Catwoman and Poison Ivy fight Captain Carrot and his Amazing Zoo Crew – to the death!” We couldn’t make this stuff up if we tried, folks. But then, we don’t get paid to! The issue is written by Steve Pugh (who also did the cover art) with interior art by Phil Winslade and John Dell. It’s on the shelves in comic shops now. 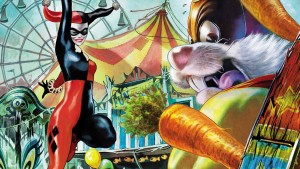