Ears up! A recent article in Variety talks about a new set of animated TV programs that Netflix has picked up — the majority of which just happen to be very furry. Or anthropomorphic if you want to get technical! Two of the original series created just for Netflix include: Kulipari — An Army of Frogs, coming in 2016. It’s based on the original novel series by NFL star Trevor Pryce (which we have noted at In-Fur-Nation before) about an army of amphibian swamp warriors. Meanwhile Puffin Rock (coming this September) is about an adventurous young puffin (and her less-adventurous little brother) living off the coast of Ireland. The other two original series, Luna Petunia from the folks at Cirque du Soleil and a re-imagining of Tarzan & Jane, may or may not have anthropomorphic elements in them — we’ll see! On top of all that, Netflix has picked up two already-existing animated series for US premier, and they are both plenty furry: Masha and the Bear from Russia, and Elias from Norway — the latter featuring anthropomorphic boats. Check the article to find out more. 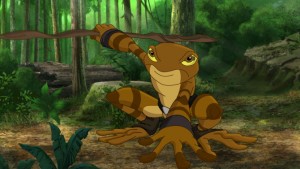