CartoonBrew.com made note that the fourth feature-length animation in the Open Season series is in production and scheduled for release on home video in the spring of 2016. “Directed by Cow and Chicken creator David Feiss (who was also head of story on the original Open Season) and produced by The Simpsons’ John Bush, Open Season’s fourth installment [Open Season: Scared Silly], animated by Canada’s Rainmaker Entertainment, centers on the mystery of the Wailing Wampus Werewolf, who reportedly haunts the Timberline National Forest that serves as the setting for the franchise. Its possible existence so intensely scares the crap out of Open Season’s domesticated grizzly bear Boog that he elects to skip summer camp, which inspires his companions, led by the one-antlered mule deer Elliot, to bombard their ursine pal with exposure therapy to cure his fears.” No word yet on who’ll be voicing Boog and Elliot this time. 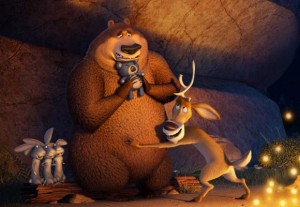