Find the Phoenix, Beat the Moo!

One of several Pokemon-wannabe series that appeared in the wake of that series’ massive success, Monster Farm (aka Monster Rancher for the US release) is one of a select few that made it to American shores in translated form. Now Discotek Media have release Monster Farm: The Complete Series on DVD. The story “… follows a boy named Genki Sakura, who is an avid player of the Monster Rancher video games. After winning a tournament hosted by the game’s creators, Genki wins a special CD that he can use to unlock a special monster in his game at home. However, upon using this disk in his game console, he finds himself transported to a world of monsters that, much like Genki’s game, are given life by scanning special stone disks within temples. There he meets a girl named Holly, who is seeking a stone disk containing a legendary Phoenix that will save the land from the tyranny of an evil ruler named Moo. While attempting to use the disk to try and release the Phoenix, they instead bring forth a different sort of monster, which Genki names ‘Mocchi’. Wanting to free the land from Moo’s rule, Genki, Holly, Mocchi and their other monster companions set forth on a quest to find the stone disk that contains the Phoenix!” Got all that? Good! Check it out over at Previews. 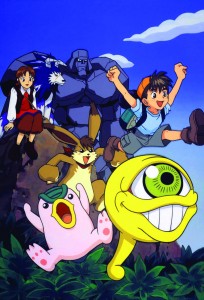