Drawing His Characters… and Many Others!

Eric Goldberg is a supervising animator at Walt Disney Pictures, well known for his work on such classic cartoon films as Aladdin, Hercules, and Fantasia 2000. He also recently began a stint as an artist-in-residence instructor for character animation at the University of Southern California (USC). For the opening of a new Disneyland in Shanghai, China, Mr. Goldberg helped to decorate one of the restaurants by drawing a series of Disney characters in the caricature style made famous by restaurants like The Brown Derby and Sardi’s in Hollywood.  In fact, Mr. Goldberg wound up drawing nearly 200 pictures for the project! Now no less than 180 of these black & white illustrations have been gathered together in a new hardcover book — An Animator’s Gallery: Eric Goldberg Draw The Disney Characters from Disney Editions. According to an article at Stitch Kingdom, “Fans of all ages, and from all over, can enjoy Eric’s playful portraits, starting with Oswald the Lucky Rabbit and Mickey Mouse from the Company’s early days through Anna and Elsa from Frozen. Bonus sections will even feature some of the most beloved characters from Pixar (Toy Story, Cars, Monsters, Inc.) and live-action films (Tim Burton’s The Nightmare Before Christmas, Pirates of the Caribbean).” Featuring text by fellow Disney animator David Bossert and a foreword by John Lasseter, An Animator’s Gallery will be available this September. 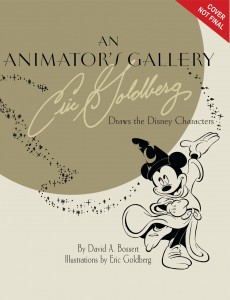