Animals Along for the Ride

When anthropomorphic characters aren’t the star of the show, the most common place to find them is as a human character’s sidekick. Such is the case with two more pre-school animated TV series on their way to Netflix in the near future. First up there’s Kazoops (from Cheeky Little studio) in 2016, which “…follows the inquisitive young boy Monty and his best friend, a pig named Jimmy Jones, as they seek answers to the questions children routinely ask about everyday life.” There’s a teaser trailer over at Cartoon Brew. Then in 2017 look for True & the Rainbow Kingdom from Guru Studio: It stars a young girl who “…with the help of her best friend Bartleby the cat navigates the magical Rainbow Kingdom using her creativity and ingenuity in search of harmony and love for all.” 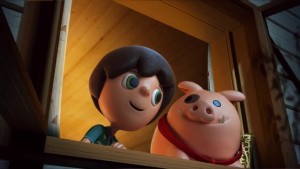