Recently discovered at San Diego Comic Con: Awake, a new full-color science fiction/fantasy comic series written by Susan Beneville, with art by Brian Hess. “Twelve year-old Regn has the power to wake and heal planets.  But, on her first mission, she lands on Gremon where she discovers an angry planet tearing itself apart, an irresponsible big brother, and a greedy baron who stokes the chaos for his own benefit.  Her power may not be enough when she comes face-to-face with the planet’s consciousness.” That description doesn’t mention that young Regn is helped on her quest by a large talking dog-like “tor” named Operi, as well as a local fox. Awake #1 is due this September from Action Lab. 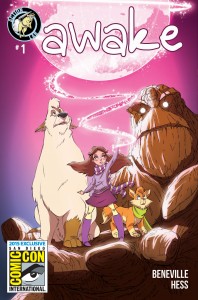