Sounds of the Forest, Getting in Tune

Three entertainment veterans have teamed up to create a new music-oriented funny animal book series for kids called The Musicritters. The first full-color book is called The New House. “Ten year old Lizzie’s world was turning upside down. Dad’s new job was taking Lizzie, her mother, and her brother Jamie far from the only home and friends that she had ever known. Little did Lizzie realize that some of the most unusual, fun and lovable new friends a kid could ever have were waiting to be discovered at her new house, right in her own backyard. Lizzie was about to meet the MusiCritters!” Namely, creatures that combine animals with musical instruments! Writer Steve Sperry is known for his songwriting work on TV shows like Fame. Illustrator Willie Ito has spent years developing characters and animation for Disney, Hanna Barbera, and Warner Brothers cartoons. And colorist Iraj Paran has worked at Hanna Barbera too — he designed their world-famous logo. The book is available at Amazon, but it’s also available as a .pdf download at several sites, including OkayBooks.org. 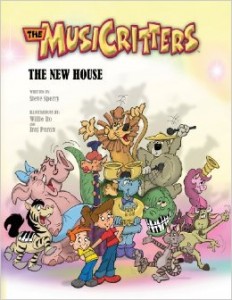