Gotta Stomp Them All?

What if Pokemon were not cute little fighting monsters but giant, city-stomping kaiju monsters? That’s the idea that inspired freelance artist Mike Vasquez to create Popzilla, a new collection of monster-themed art. That’s where it started anyway, but then it expanded to include any number of well-known pop-culture icons re-imagined as kaiju. Over at Kickstarter the art book has already been successfully funded, but go anyway to find out more about the project. Or, you could just visit Mike’s web site (entitled Mike Goes Geek, perhaps appropriately) and follow his blog. Several sketches are there too. 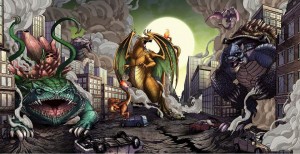