Remember The Punky Pets? Here’s a refresher: “Who are the Punky Pets? These eight vastly different musicians meet up for the first time while auditioning for the hit TV show International Icon, in New York City. Their dreams of stardom are crushed when each performer gets booed off the stage, laughed at, ignored and criticized for their lack of talent. At least now they all have something in common. They talk about giving up, they express self-doubt, and they call each other rejects. In their darkest hour they see the light. With the help of a talent scout, they decide to turn their tragedy into triumph and form their own punk rock band.” Got it?  Well now in addition to the music videos and various tie-in products on the Punky Pets web site, there’s a new Punky Pets app game for the i-Phone and Android formats. Join DJ Freak, lead singer monkey, as he races around New York trying to collect instruments in time for the band’s next gig! 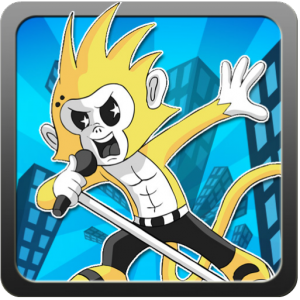