Step Into The Cartoon

The world of Virtual Reality entertainment keeps moving ahead. (By leaps and bounds, or by steps and stumbles? Depends on who you talk to.) Recently Cartoon Brew put up an article about Henry, “an Immersive Virtual Reality short”. “On the surface, Oculus Story Studio’s new 12-minute short film Henry is a sweet story about a lovable hedgehog who just want to make friends, but can’t stop spiking whatever he hugs. ” But actually, it’s one of the first animated films ever created for the environment of the Oculus Rift head-set. Once “inside”, viewers can either watch Henry’s story — as he attempts to hug flying balloon-puppies with disastrous results — or explore the levels and rooms of Henry’s tiny home. Or both. There’s a non-Oculus “making-of” video that explains it more. 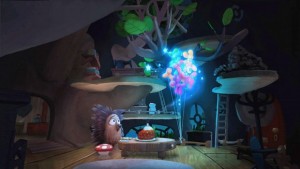