Mutants On The March!

This past spring, the Teenage Mutant Ninja Turtles universe saw the return of one of the famous four’s most-popular and perhaps strangest friends: The Mutanimals, appearing in their own five-issue full-color mini-series by Paul Allor, Andy Kuhn, and Ben Bates. Well now IDW are about to release the series as a Mutanimals trade paperback collection. “Old Hob, Slash, Herman the Hermit Crab, Mondo Gecko, and Pigeon Pete have become a force to be reckoned with. When someone close to the group is kidnapped, the Mutanimals end up on an adventure more wild and dangerous than they could have imagined! What mysteries lurk at…The Null Group?” Look for it on the shelves August 19th, or you can pre-order it over at Things From Another World. 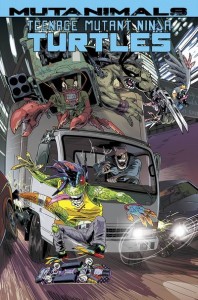