Return of the Roar

More news regarding Disney TV Animation’s upcoming new Lion King spin-off series The Lion Guard, thanks to a recent article in Variety: “Disney will launch The Lion Guard: Return of the Roar, a short prime-time movie focused on the son of Simba, the hero of the original film, in November on Disney Channel. The program will follow Kion, Simba’s second-born cub, as he and a team of animals known as ‘The Lion Guard’ try to keep the peace in the surrounding terrain. Disney intends to launch a Lion Guard TV series on Disney Channel and Disney Junior outlets around the world in early 2016.” In this new series, “Kion breaks tradition by forming ‘The Lion Guard’ out of a varied group of animal friends he thinks are heroic. Typically, only the bravest, strongest lions in the African savanna can be members.  In the movie and the TV episodes that follow, the crew will learn how to use unique abilities to solve problems while introducing young viewers to new kinds of fauna.” The article includes a short video clip from Return of the Roar as well. See you in November! 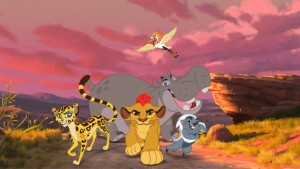