Cartoons Rising in the East

And another article from Variety. The big news in animation this year has been China: Not only working on farmed-out animation for American productions, but actually hiring American talent to work on home-grown Chinese productions intended for international release (hello, Rock Dog!). China is having its biggest year ever for domestic animation. The film Monkey King: Hero Is Back (yet another adaptation of Journey to the West) has set box-office records for an animated film in China. In the midst of all this the Chinese animation house called Original Force have announced they’re opening an office in Hollywood with the intention of working with American talent to create new films. Cool thing is: Several of them are furry. “Original Force is currently in production on Duck Duck Goose, the story of an unlikely family, directed by Christopher Jenkins, who recently produced DreamWorks Animation’s Home, from a screenplay by Jenkins and Rob Muir. Voice talent includes Zendaya, Greg Proops, and Lance Lim. OldZilla and QQ Speed are in the early stages of production. OldZilla follows King Saurus as he starts to deal with his advancing age and urges his elder monsters to go on one last rampage. Bob Bendetson (The Simpsons) is directing, and co-wrote the script with Art Everett. QQ Speed is based on a popular online game and is a co-production with Tencent Holding, which is behind the game. The action-adventure follows a brother-and-sister racing team and their car equipped with a voice that sounds like their late father’s. John Eng (Rugrats Go Wild) is developing the project and will direct.” 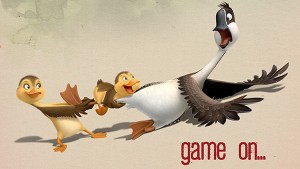