And once again Disney Junior keeps marching forward with Goldie & Bear, a new CGI series that is coming as a downloadable app in September and then a TV series later in the year. According to the article in Variety: “Each episode of the new program, which will debut on Disney Junior in November, includes two 11-minute stories that show Goldie and Bear — reunited after an infamous ‘porridge incident’ — in the midst of escapades with their neighbors in Fairy Tale Forest, all of whom have roots in familiar storybook figures. The protagonists might help Jack and Jill get up a hill or ask the Big Bad Wolf to consider others’ feelings before blowing down the houses of those who reside within.” The article also features interviews with Disney Junior folks and a preview video. 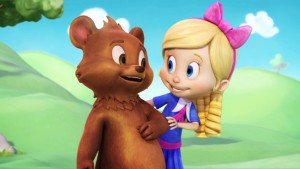