Somehow Marvel Comics sneaked this one by us. Howard the Human is out on shelves right now as part of their Secret Wars mega-series. “The story [finds] Howard, formerly a Duck, as a human being. What’s more, Howard will be the only living homo sapien in a city filled with animals. Talk about a role reversal. But that doesn’t mean Howard will have a ho-hum adventure. The former fowl will see plenty of cases as a private investigator, all while dodging bullets and crossing paths with a murderous anthropomorphic animal. Or, as Howard calls it, Monday.” This full-color one-shot was written by Skottie Young (well known now for Rocket Raccoon) and illustrated by Jim Mahfood. Read the interview with Skottie over at Comicbook.com. 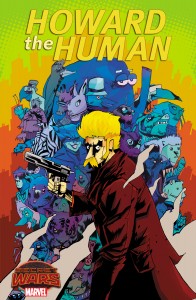