Another Bunny Not To Mess With…

Guardian Knight Comics has a new-ish full-color adventure comic out, featuring another kick-@ss rabbit. “Death for the weak, honor for the brave, and women and gold for no good dirty pirates, however, the infamous bandit Bones has set a course for revenge, and when a wanted man such as he returns to the kingdom, it never bodes well… for the kingdom that is!” Bones, in case you haven’t figured it yet, is the rabbit in question.  One friend of the artist described the comic as “… like if Conan was Bugs Bunny and he sworded his way through Final Fantasy while making out with Zelda”. Got all that? Gears & Bones is written by William Thomas and Andrew Anderson, with art by Osvaldo Pestana Montpeller. Issues are out on the shelves already. 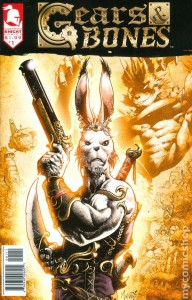