One of the mostly instantly-viral furry phenomena this summer has been the “opening credits” for an anthropomorphic “80’s cartoon TV series” called Super Turbo Atomic Mega Rabbit. The “leaked video footage” certainly looked the part of an 80’s cartoon show, and speculation ran wild — especially with posts popping up all over the Internet on various forums, asking pointedly “Does anyone remember this series?” Well, more recently, the truth has come out: STAMR is the creation of a UK team of animators and animation fans. The “opening credits” were directed by Wesley Louis and his team. Now, having come out of hiding on the Internet, the STAMR crew are actually trying to create a real episode of the imaginary show they’ve made so popular. To that end they are selling copies of a book called Groundworks, featuring production art and character designs from the creation of the STAMR short. Furry.Today has a link to the site, as well as the short (which now features proper credits!). 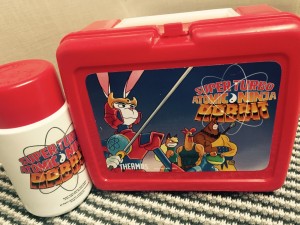