We’re Growing Accustomed to Each Other

If you haven’t been reading the newly-reinvigorated Howard the Duck comic book series from Marvel Comics… well, why haven’t you?? Taking flight from his post-credits cameo in the Guardians of the Galaxy movie (and seemingly having gotten over that whole George Lucas… thing…) Howard has been basking in the attention brought to him by this new full-color comic written by Chip Zdarsky and illustrated by Joe Quinones. In case you need to do some catching up, this October Marvel is releasing issues # 1 through #5 of the new Howard series collected together in a single trade paperback, Howard the Duck Volume 0: What The Duck. BleedingCool.com has an extensive background piece on Howard in general and the new series in particular. 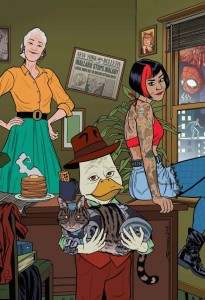