Love and Tolerate the Snot Out of Each Other

Once upon a time there was an on-line game in development called Fighting is Magic, attempting to create a “Ready! FIGHT!” style inter-player game based on My Little Pony: Friendship is Magic. Unfortunately, the Powers That Be at Hasbro decided that the game was a little bit too close to the TV show for comfort, and the project was shut down. Fast forward a couple of years: Now none other than Lauren Faust, the original show runner for Friendship is Magic, is on board to help with the development of a whole new game — in a whole new world. This is from the Indiegogo campaign: “Help a cast of cute animals beat each other up by making Them’s Fightin’ Herds become a reality! Them’s Fightin’ Herds is a 2D PC (Windows, with Linux/Mac as stretch goals) fighting game with adorable animals in an original universe designed by Lauren Faust (producer and developer for My Little Pony: Friendship is Magic; creator, director and developer for Super Best Friends Forever). It is the spiritual successor to Fighting is Magic, with improved gameplay mechanics and graphics, an entirely new (and awesome!) dynamic music system, a graphic lobby, and a whole bunch of new features.” The Indiegogo page features several preview videos as well as numerous preliminary sketches by Ms. Faust herself. 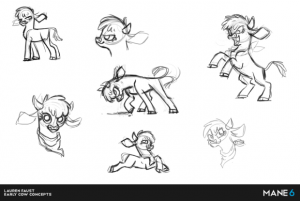