Sanjay and Craig is a popular animated TV series on Nickelodeon, following the adventures of (you guessed it) Sanjay (a human boy) and his pet snake, Craig (who talks — but only Sanjay is supposed to know that). Well now Paperkutz (home of Geronimo Stilton and family) have released the first Sanjay and Craig tie-in graphic novel, Sanjay and Craig: Fight the Future with Flavor! “Does your neighbor have butt implants and a blueberry obsession? Can your best friend do ANYTHING without barfing? Welcome to Lundgren, where Sanjay Patel and Craig Slithers have the most rad-awesome adventures imaginable. From their collection of fart jars to their shared love of chicken wings, Sanjay and Craig are more than a boy and his pet snake… they’re family! Ready for the ride? Buckle up your fart baby and grab some napkins because Sanjay and Craig are about to douse you in awesome-sauce. NOICE! See you at the Frycade!” Did any of that make sense to you? Then you might want to have a look at the Paperkutz preview page. Fight the Future with Flavor! is out now in hardcover and trade paperback. 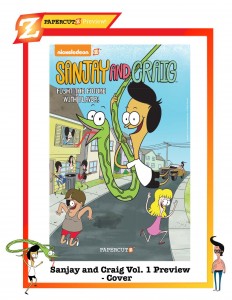