This Will Take You Back. Way-Back.

You might recall that last year Dreamworks Animation’s CGI take on Mr. Peabody & Sherman was rather a disappointment at the box office according to some analysts. Evidently though that didn’t dampen Dreamworks’ interest in the characters as now they bring us The Mr. Peabody & Sherman Show. It’s coming to Netflix this Friday, this time in a more traditional 2D animated version. According to the article at Cartoon Brew, “In the new series, Mr. Peabody (voiced by Chris Parnell) and his boy Sherman (Max Charles) host a talk show from their New York City penthouse, in which they interview historical figures like George Washington and Edgar Allen Poe. They also embark on time travel adventures in their WABAC machine visiting the likes of Cleopatra, Mozart, and Marco Polo.” There are also musical numbers to be had, and Cartoon Brew has a preview of one of them — as well as the show’s opening. 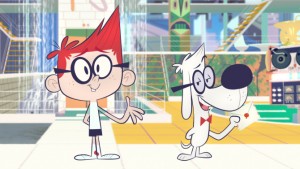