Word has been spreading like mad that Bloom County creator Berkeley (Berke) Breathed has been creating brand new strips for the first time in 25 years. Now on top of that comes the news that IDW Publishing plans to bring together the first new Bloom County collection book in as many years — in 2016. “Breathed’s Pulitzer Prize-winning Bloom County ran from 1980 until 1989, when Breathed walked away from the strip at the peak of its popularity. Then, in the summer of 2015, and with no advance warning, he brought the cast of Bloom County back to an unsuspecting world — via social media — which caused a media frenzy as word of the strips unexpected return spread virally to multitudes of delighted fans. ‘As a fan, I was ecstatic when new Bloom County strips began to appear, said editor Scott Dunbier. ‘As an editor, I’m thrilled to work on this book—thank you, Berkeley!'” Watch this space after New Years for updates! 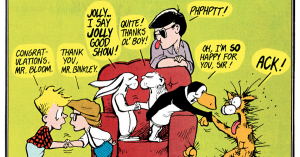