In case it slipped beneath your radar, Chi’s Sweet Home is a manga series created by Kanata Konami in 2004. “Chi is a mischievous newborn kitten who, while on a leisurely stroll with her family, finds herself lost. Overcome with loneliness she breaks into tears in a large park meadow, where she is rescued by a young boy named Yohei and his mother. The little kitty is then quickly and quietly whisked away into the warm and inviting Yamada apartment…where pets are strictly not permitted.” Vertical Comics licensed the manga for translation and distribution in the west. Now, they’ve released the first large-format collection in trade paperback. “Vertical’s most popular comic of all time, Chi’s Sweet Home, is now available in a larger format with brand new content! Hot on the heels of a new DVD release and the summer 2015 conclusion of its thirteen-year serialization, Chi’s Sweet Home gets a new deluxe release for new readers to dive into. The Complete Chi’s Sweet Home collects three volumes of this full-color all-ages adventure of Japan’s favorite kitten heroine – Chi! This new edition also features a brand new comic from Konami Kanata’s latest series in Japan – FukuFuku: Kitty Tales! This new release will feature new craft extras and a new story from the author.” Check it out over at Comic Book Realm. 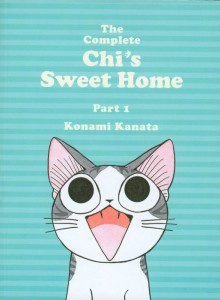