And This Cat Complains

Salem Hyde is a black & white fantasy comic series written and illustrated by Frank Cammuso — which he’s published in 5 collections since 2013. Here’s the description of the first volume, The Misadventures of Salem Hyde, Book One: Spelling Trouble: “Salem Hyde just isn’t like other kids. For one thing, she’s stubborn, independent, and impulsive. For another, she’s a witch. Salem acts first and thinks later—which means most of her thinking involves coming up with excuses! Good thing she’s been assigned an animal companion, Lord Percival J. Whamsford III. This over-anxious cat doesn’t like Salem calling him ‘Whammy,’ and Salem doesn’t like listening to his long-winded explanations as to why she shouldn’t do something . . . like enter the class spelling bee.” Of course he’ll try to explain to her they mean something different by “spelling”. Good luck! Check out the first book (available in hardcover and paperback) over at Barnes & Noble, then follow the links to find the rest. They’re published by Amulet Books. 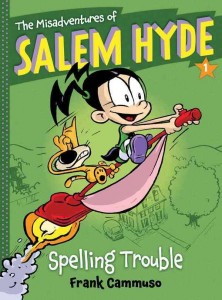