Children’s Stories Can Be Deadly

In case you missed it, Paul Jenkin’s Fiction Squad comic book mini-series was a continuation of his Fablewood concept: A place where all fairy tales and bedtime stories live side by side. Now Boom! Studios have collected the entire 6-issue series in a new Fiction Squad trade paperback. “Fablewood is a pretty dangerous place, but no area is more dangerous than the City of Rimes, deep in the heart of the Children’s Realm. After transferring in from the Realm of Mystery, a failed detective from an unfinished prose novel, Frankie Mack, is about to uncover a conspiracy that could unmake storytelling itself. After Humpty Dumpty is pushed to crack and Jack (of Jack and Jill) goes AWOL, Frankie and his partner, Simple Simon, are put on the case.” With full color illustrations by Ramon Bachs, the book is 160 pages and it’s coming very soon. Take a look over at the Boom! web site. Anthropomorphic animals (and many other things!) abound. 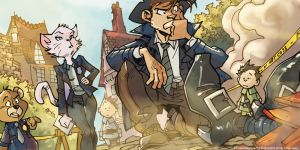