The Horror of Kitties

Junji Ito is a well-known creator of horror manga in Japan, celebrated for his intricate black & white artwork. Now he’s done something… different. Autobiographical.  But with a twist. It seems that Mr. Ito invited his fiancee’ to move in with him.  Wonderful.  Unfortunately… with her comes her two pet cats. A strange white cat named Yon (whose white fur features a skull-like pattern on the back) and Mu (a fluffy and fun-loving country cat). Mr. Ito is a bit put out by this development — especially since he’s a dog person! Now he’s detailed his frequent attempts (and frequent failures) to bond with these new feline housemates in a new manga, Junji Ito’s Cat Diary: Yon & Mu. More recently, Kondansha Comics have translated the manga series and released them together in a single graphic novel. In black & white, of course! Find out more at Amazon. 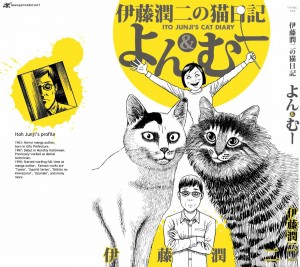