He’s a Titan of Kung Fu!

Back in 2011 Kizoic Comics created a tie-in comic book line for Kung Fu Panda, anticipating the release of the Kung Fu Panda 2 animated film that year. Well now in anticipation of next January’s upcoming release of Kung Fu Panda 3, Titan Comics are having a go with their own full-color Kung Fu Panda comic, written by Simon Furman and illustrated by Lee Robinson. “Po has been a busy Kung-Fu Panda! He’s had 2 hit movies, a successful TV show, and there’s another exciting movie on the way! And now he’s set to get even busier in his own brand new comic! Join Po, The Furious Five and Shifu – and all their enemies – for their own comic strip adventures! This issue kicks off a  special two-part story: Wake Me Up Before You Po-Po!” Seriously. It’s on the shelves now! 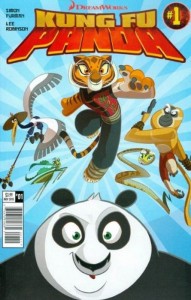