Animation World Network has a recent article about two more new animated shows that were presented at MIPCON this year — both of them produced by m4e in Germany. Wissper is “… a CGI animated TV-series aimed at young girls ages 4 to 7. Wissper is a perfectly normal little girl, but she has a very special talent: She is the only girl in the world who can talk to animals! Creatures of all shapes and sizes seem to instinctively know that when they have a problem, Wissper will find the solution. This makes Wissper’s house the first port of call for animals in distress.” The first set of episodes are supposed to premier world-wide before the end of December. And then, there’s Atchoo! Another animated series, this time targeted at slightly older boys and girls.  You see, there’s this young boy named Teo, with an unusual attribute: When he gets excited or upset, he sneezes… and instantly turns into an animal.  Different each time. “The series offers loads of comedy, gags and funny dialogues, but all the fun is aimed at communicating an important message, that difficulties, fears and diversity are not necessarily all bad, but can engender endurance and originality.” That’s what they said folks! Atchoo! is scheduled to hit the world in 2017. 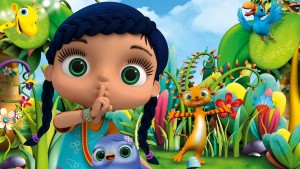