DHX Media (the production home of My Little Pony: Friendship Is Magic, Littlest Pet Shop, and many many more) have recently signed an international distribution deal for a new CGI TV series called Endangered Species. Unfortunately, so far none of those distribution deals include the USA! “The series follows Pickle, Merl and Gull, a bunny, a squirrel and a seagull who might not seem high on the protected species list, but who are constantly on the verge of catastrophic extinction through comical misadventure.” Check out the article over at Animation World Network to find out more. 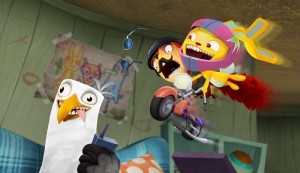