The Ollie & Moon Show is a new 2D animated TV series, based on a popular children’s book series by Diane Kredensor, “…an Emmy Award-winning artist, director and producer whose credits include Pinky and the Brain and Clifford the Big Red Dog, among others.” [So says Variety]. “In the series, two animated cats travel around the world. teaching viewers about the joy of unlikely friendships and global citizenship… The series will use art that blends live-action with 2D designs.” Ollie is a young cat who likes to plan and schedule his far-flung trips around the world.  Moon… likes to bounce off the walls. Somehow these two get along well enough to travel together and learn as they do. The series has been picked up by NBC’s Sprout Network for broadcast starting in 2017. 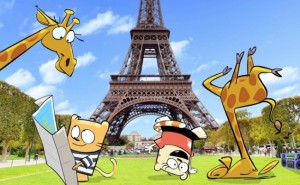