Woo! And one more more MIPCOM entry. Bat Pat is a production of Atlantyca Entertainment in Italy. According to Animation Magazine, “The 2D series follows the spooky and comical adventures of a talking bat, Bat Pat, and the [human] Silver siblings… as they unravel mysteries and cross paths with supernatural creatures of the night in the quirky town of Fogville.” According to Atlantyca, “Bat Pat grew up in a dark library in a different town, so he has an encyclopedic knowledge of the various creatures of the night. Bat Pat is like a kid full of wide-eyed wonder, he truly appreciates the little thing daytime offer but nighttime is where Bat Pat really thrives. Despite his initial fears, he’s equally driven to help supernatural creatures in need because Bat Pat shares a common link with them…they’re both creatures of the night and usually misunderstood by ‘normal’ people! Bat Pat is very loyal to the kids and they love him, they consider Bat Pat ‘the flying Silver’.” The show is based on the popular series of young reader books by Roberto Pavanello. Atlantyca has a production web site for the show that includes lots of background notes and a video trailer. 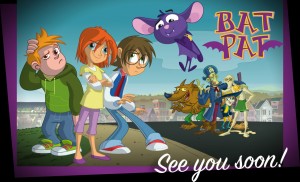