Interesting series you probably never heard of. Yoohoo & Friends is both a 2D animated TV Show and a toy line created by Aurora World in South Korea. According to Wikipedia, “Officially developed in 2007, the series was created to educate children about protection and preservation of the environment and encourages parents and their children to appreciate friendship, harmony, honesty and courage.” The star is a young bush baby named Yoohoo, hoo (gotcha!) travels with world having adventures with his young friends — all of them representing endangered species. The series has been picked up for distribution in North America. No sign of it yet — except in Europe and Asia — but you can see episodes (in English no less) on YouTube. 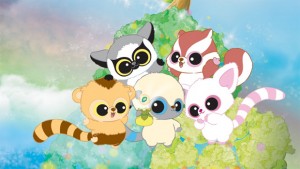