One of comic book great Jack Kirby’s more obscure creations was the Devil Dinosaur and Moon Boy series — obscure, but still popular among comic book collectors. It featured the adventures (on a parallel, savage world) of an ape-like proto-human named “Moon Boy” and his companion, a firey-red tyrannosaurus rex with human-level intelligence.  And now Marvel comics have brought Devil Dinosaur into modern times, literally, with their new series Moon Girl and Devil Dinosaur — written by Brandon Montclare and Amy Reeder, with art by Natacha Bustos. This time around “Moon Girl” is a young human (with some “Inhuman” secrets) who just may be a genius inventor in the making. In the midst of one of her experiments though, she accidentally drags Devil Dinosaur into our world and our time. Talk about a pair who just don’t fit in! The first issue is on the shelves now, and i09 has an interview with the creators as well. 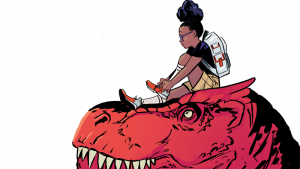