All Right You Big Ape, Draw!

Fans of comic book art how-to’s would be wise to look up the Pen & Ink series from Boom! Studios, where professional comic book artists go into the details of their creative process in a step-by-step manner. For the next installment, Boom! have tapped the creators of the popular series Six-Gun Gorilla (which we’ve covered here previously). Now artist Jeff Stokely (aided by insights from writer Simon Spurrier) bring us Six-Gun Gorilla: Pen & Ink, which re-creates the first two issues of the comic in a large 11 x 17 inch black & white format with commentary on each panel. You can check it out over at Previews. 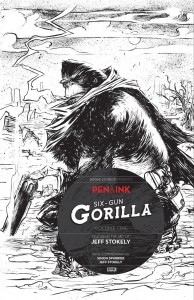