Are You a Good Wish, or a Bad Wish?

Over at Cartoon Brew there’s an article about Wish Police, the next big film project to come out of Reel FX (home of Free Birds and The Book of Life). “Based on a novella of the same name by Daniel Nayer, Wish Police takes place in a world where children’s bad wishes come to life as mayhem-making villains, and a secret organization called The Wish Police must work full-time to apprehend the evildoers. The Wish Police are led by Saul, an ex-genie determined to atone for centuries of granting his masters’ evil wishes, and Kong, a wise-cracking monkey and royal pain in the leg. In the film, Saul and Kong must break their personal rules and team up with a 12-year-old boy named Randy who has made a particularly bad wish and unleashed the most powerful wish villain ever seen.” The film is to be directed by three young filmmakers from Spain, Adrian Garcia, Alfredo Torres, and Victor Maldonado, “who are collectively known as Headless”. The CGI film is being produced by Kirk Bodyfelt (Cloudy with A Chance of Meatballs 2) and written by some folks who worked on Kung Fu Panda. The film is scheduled for release in late 2017. 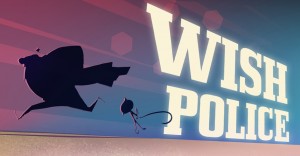