… And He Never Spoke

Anyone interested in animation should know about Depatie-Freleng Enterprises, the birthplace and home of one of America’s iconic animated furries, The Pink Panther. Not to mention cartoons like The Ant and the Aardvark, The Cat in the Hat, The Lorax, Doctor Dolittle, The Fantastic Four, Doctor Snuggles, Baggy Pants and The Nitwits, The Barkleys, The Houndcats, The Grump, The Super Six, Super President, Spy Shadow, Hoot Kloot, Blue Racer, Crazylegs Crane, Misterjaw, Tijuana Toads, The Dogfather, The Oddball Couple, and Charlie the Tuna (whew!). Now animation historian Mark Arnold has chronicled the rise of DFE in Think Pink! a new hardcover book of more than 600 pages (!). “In 1963, Warner Bros. closed down their long-running cartoon facility that had produced such memorable merrymakers as the Looney Tunes and Merrie Melodies cartoons. Director/producer Friz Freleng and executive David H. DePatie faced unwanted early retirement. A generous parting gesture from a Warner executive allowed Freleng and DePatie to lease the former Warner cartoons studio on California Street in Burbank, complete with equipment and supplies, for a few dollars each year.” The book is available now — find out more at the Bearmanor Media web site, or just head to Amazon. 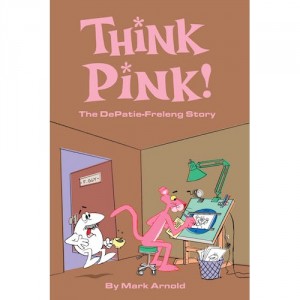