One Day A Lonely Bear…

[We hope you all had a Merry Christmas — and have a safe New Year!]

Bear Story is a short CGI animated film by Gabriel Osorio at Punkrobot Studios in 2014. Since then it has won over 50 international awards in the animation festival circuit. According to an article at The Wrap, the film “…is an ingenious, dazzling piece of 3D animation, the sad story of a lonesome bear who builds an elaborate mechanical diorama in an attempt to remember (and perhaps recover) the life he used to live with his wife and son, before he was ripped from his home and sent to a circus. But audiences in Osorio’s native Chile immediately know that it’s more than that — it’s also an allegory for the way families were torn apart during the murderous Pinochet regime in Chile in the 1970s.” Bear Story has been short-listed for an Academy Award for 2015. You can see a short making-of film and a trailer for it over at the Punkrobot web page. 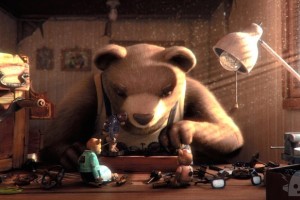