Damon Bard is a sculptor, 3D modeler, and character designer with decades of work under his belt. He says it best himself on his web site: “For 28+ years now, Damon Bard has been working as a freelance artist in the entertainment industry primarily as a sculptor but also as a development artist and designer of characters and creatures. Since then, he has contributed to nearly 30 films and other various projects during his career. Damon has also been fortunate enough to have worked along side some of the most talented, acclaimed and awarded artists and directors in the industry and on a few of the most successful films ever made: Kung Fu Panda II, How To Train Your Dragon, Coraline, Kung Fu Panda, Ratatouille, Shrek 2, Star Wars: Episode 3, and Madagascar to name a few. Additionally, Damon works on his bronze figurative sculpture and oil paintings between and during projects as time allows.” A busy artist. His site also features a link to his demo reel, showing off some of his 3D digital works. 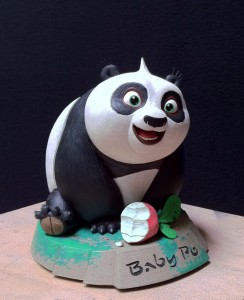