Humans are a Distant Memory…

Published at the tail-end (ha ha ha) of 2015 we have Barsk: The Elephants’ Graveyard, the first book in a new series by Lawrence M. Schoen. Here’s the official description from the publishers, Tom Doherty Associates: “In a distant future, no remnants of human beings remain, but their successors thrive throughout the galaxy. These are the offspring of humanity’s genius: Animals uplifted into walking, talking, sentient beings. The Fant are one such species, anthropomorphic elephants ostracized by other races, and long ago exiled to the rainy ghetto world of Barsk. There, they develop medicines upon which all species now depend. The most coveted of these drugs is koph, which allows a small number of users to interact with the recently deceased and learn their secrets. Surrounded by danger, a Fant historian is ensnared by the past, and a physically challenged child sees the future. Between them are truths that will shake worlds.” It’s available now in hardcover at Barnes & Noble. 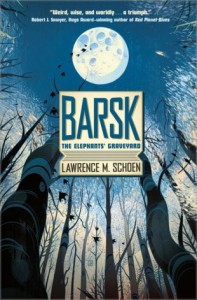