He Speaks with the Trees

After becoming that much more well-known the world over (thanks to a certain hit live-action movie, we hear), both Rocket Raccoon and Groot (the talking tree) found time to star in their own full-color comic book series from Marvel. What fans wanted though, of course, was for them to team up again and bring more of their own special brand of mayhem to the galaxy. Wishes granted! Now Skottie Young (writer) and Filipe Andrade (illustrator) have returned with a brand new series called (what else?) Rocket Raccoon and Groot.  And this time, Rocket is… an interplanetary crime boss? Say it isn’t so! See what they DO say over at the Marvel Comics web site, where they interview Mr. Young for his perspective on this. [And with that, we’ll see you after Further Confusion!] 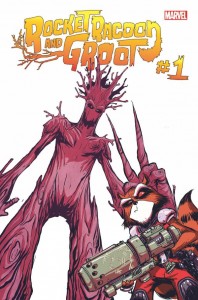