Back from Further Confusion 2016 with a new batch of interesting things to let you know about! First up: AjSHROY is a graphic artist interested in sequential art and illustration (as well as costuming). You can see her works over at her website, zia.li. Meanwhile, her currently active comic is called Birblyfe, which you’ll find over on a web site called ilk.space: “The ilk are a highly advanced bird civilisation whose territory occupies a series of large islands off the Northeastern coast of Tsim-Edien. Collectively, the island cluster is known as Rork. Residents of this region live in relative isolation from the rest of the world. Birblyfe follows the lives of two townbirds, Benjamael Grimroth and Peter Mayden, as their normal routines are disrupted by a strange celebrity of unknown origin.” Lots of character information and sketches to be found there as well. 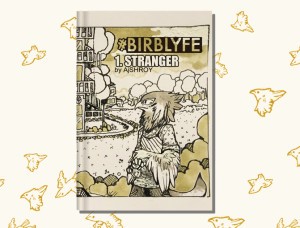