In addition to the industry-voted honors, each year the Annies celebrate several talented individuals with special honorary awards. This year, all four recipients had a history of anthropomorphic works of one sort or another. The June Foray Award (for service to the community and art of animation) went to veteran Disney producer Don Hahn, who of course helped to shepherd Who Framed Roger Rabbit?, Beauty and the Beast, and The Lion King (among many other films) into existence. The Windsor McCay Award went to three individuals for their lifetime achievement in cartoons. Isao Takahata (co-founder of Stuido Ghibli with Hayao Miyazaki) is celebrated far and wide for anime films like The Grave of the Fireflies and The Tale of Princess Kaguya, but he also directed the tenuki adventure Pom Poko. (And, early in his career, he directed episodes of Panda! Go Panda!) Phil Roman founded his animation studio Film Roman in the 80’s, and they have since become famous as the home of The Simpsons and King of the Hill. But they are also the studio that gave us furrier works like Garfield and Friends, Cro, Mother Goose and Grimm, C-Bear and Jamal, and The Twisted Tales of Felix the Cat. Finally, a special posthumous McCay Award was presented to the memory of Joe Ranft, Pixar Studio’s head of Story, who died in a tragic car accident ten years ago. Over the years Joe worked on numerous animated films at Pixar and Walt Disney Animation, but he may perhaps best be remembered as the voice of Heimlich the caterpillar in Pixar’s movie A Bug’s Life. 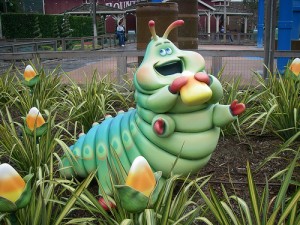