The Boy and His Dragon Return

Four Eyes is a comic book series created by writer Joe Kelly and illustrated by Max Fiumara in 2008. It’s set in Depression-era New York City on an alternate earth where dragons are enslaved by humans. The first story arc, Forged in Flames, “…is about a boy who’s trying to get back at a gang that’s directly responsible for his dad’s death…the world in which they live is a world where underground dragon fighting is entertainment for the masses” [Wikipedia]. Image Comics gathered together Forged in Flames as a trade paperback last year. Well now Image announced the publication of Four Eyes: Hearts of Fire. “Launching the second arc in the critically-acclaimed story of a boy and his dragon on the hunt for revenge in Depression-era New York City. The training begins.” The boy and his 4-eyed runt of a deadly dragon are out on the shelves now. 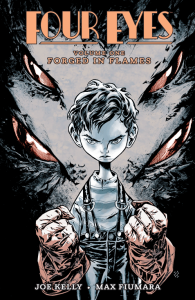